10 EPL Players Who Deserve An Upgrade In FM16 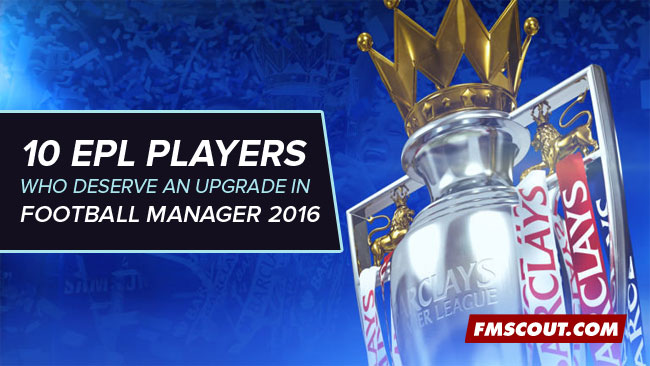 After yet another exciting Premier League season, a number of players have stepped up and produced at levels that others may not have expected of them. These players deserve recognition and, more importantly, an upgrade on Football Manager 2016. Here is a list of 10 players who I believe deserve upgrades on our favourite football management simulation franchise.

The breakthrough player of the season last term, the Spurs striker has caught the attention of football fans across the globe and has even earned him a recognised place in England's senior squad. The PFA Young Player Of The Year demonstrated his wide range of attacking abilities which carried Tottenham Hotspur to a very respectable 5th place finish. Kane brings a breath of fresh air to the Tottenham squad and deserves an upgrade in FM16, especially to his Dribbling, Leadership and Pace attributes. Can he be the man to bring Champions League football back to White Hart Lane? Who knows, maybe he will be your star striker in a stellar FM16 save!

This is probably the biggest surprise in this list but Puncheon is certainly a player who I admire. While much has been written and said about Bolasie's exploits for Crystal Palace last term, it is certainly worth mentioning the man on the opposite flank who has provided great service to his Palace team-mates throughout the season. A quick skillful winger with a good set-piece in his armoury, Puncheon is a player worth considering for a place in the England set-up, and in your squad in FM16. While many may not agree with me, he is a player deserving an upgrade next season as he continues to impress under Alan Pardew.

Staying on the topic of wingers, nobody made quite the sudden impression like Jordon Ibe did. On loan at Derby County for the best part of half a season, Ibe returned to Brendan Rodgers' Liverpool side with a bang as he impressed on the right flank, often as a right winger or even a right wing-back. Ibe demonstrated great pace, power and a hunger to close down opponents and aid his team. While he is nowhere near the complete package just yet and often attempts one too many skill moves, he has come on in leaps and bounds and has become a winger worth fearing.

Francis Coquelin made quite a break-through in to Arsenal's squad, and it is no coincidence that his arrival saw an uplift in fortunes for the Gunners, who went on a rampant run of form in the second half of the season. Wenger desperately needed a ball winner in his midfield and Coquelin more than just provided that, demonstrating his cultured and composed all-round play too. Coquelin was one of the most consistent tacklers in the Premier League and brought great excitement to the fans at the Emirates when he settled in to the starting eleven. He certainly fits the Arsenal style of play and certainly deserves a huge upgrade on FM!

With Carl Jenkinson on loan to West Ham and new signing Mathieu Debuchy out injured for large spells last season, Bellerín was called upon by Arséne Wenger to fill in at the right back position. The Spaniard certainly cemented his place in the starting line-up by demonstrating great defensive skills and even more impressive attacking movement as he linked up with Arsenal's star attackers very well in the final third. Bellerín brought back a dimension to Arsenal which had been missing since the departure of Ashley Cole to Chelsea, and Arsenal fans have every reason to be excited by their new star. A future spot in Spain squad isn't out of the question and he'll be looking to cement his place in Arsenal's starting eleven once again in the coming season.

Another full-back who impressed us all was Southampton's Ryan Bertrand. Having previously been touted as a future star at Chelsea, he failed to break in to a team which for years included Ashley Cole and more recently César Azpilicueta (see below) and Felipe Luís. A move to Southampton followed last season and he fit in more than well as he became part of one of the best defences in the country, while also providing excellent wide-play and service for his team's front men. England fans have demanded Bertrand's inclusion in the national team, and with good reason. FMers are hoping for an upgrade to match his stellar season for his new team.

In a season which saw much chopping and changing at Old Trafford, Chris Smalling was one of the few who stood out as a star for the whole season. While Manchester United's defensive record was less than impressive, it was Smalling, and of course De Gea, who gave hope to United fans and rescued the club in some games. Smalling is looking to break in to England's starting line-up and another impressive season could see him do so. I firmly believe he deserves an upgrade on FM and perhaps he can be a rock at the back for you!

Of course, it is worth admiring the defence of the current champions, Chelsea, and César Azpilicueta was a stand-out player in a terrific season for the Blues. Naturally a right-back, Ivanovic's presence has pushed the Spaniard to the opposite flank but he has made that position his own, knocking back Brazilian international Felipe Luís, despite the latter's expensive fee. While providing a typical Spanish passing ability and an outlet for his Chelsea team-mates, Azpilicueta also supplies an impenetrable defensive presence that frustrates opposition attackers to no end (just ask Liverpool and Manchester City!). The Chelsea full-back deserves a huge upgrade yet again on FM and he could become a top player for those who manage the Blues on FM16.

The Spaniard wasn't the only one to impress for Chelsea last season as Ruben Loftus-Cheek broke in to the side towards the end of the season. While there was no pressure on him to perform, Loftus-Cheek provided composed and impressive performances, showing he has maturity beyond his years. His physical presence provides a boost to Chelsea's midfield (in comparison to Fábregas, Oscar, Willian and Ramires) while his all-round play is something to appreciate. He isn't rated too highly on FM15 and deserves a huge boost in the next installment of the game.

And last  but certainly not least, I believe Raheem Sterling deserves an upgrade too. While he was under heavy criticism by the media and Liverpool fans for his antics off the pitch, Sterling proved, on the most part, that he had improved. Sterling played in a multitude of positions, including a False 9 role, and excelled in the first half of the season by scoring a number of important goals for the Reds. Now a Manchester City player, Sterling has put in a very impressive pre-season to date and looks set to be a key part of Manchester City's attack. While he may have his haters, he has his admirers too and deserves an upgrade on FM16.


You can see what our Facebook fans answered here.

Do you agree with these picks?
Which players do you think should receive a boost for FM 2016?
Let us know in the comments below.