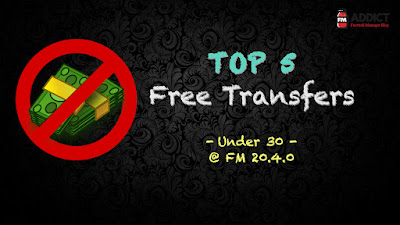 So, you started a new save after the last update and discovered that Lucas Silva had started to play for Gremio, ah?

Why under 30? Well... they can bring value to your team longer than over 30s, you know... and hey, this way we have space for another list above 30!

#1: Daniel Sturridge (ST - England - 29)
Quite surprising this superb striker doesn't have a club at this point. He still can provide tons of goals to any team.

#2: Samu (AM RLC - Spain - 28)
This guy has played in La Liga for 6 years, and has even played at Rubin's for a couple seasons. Not for the biggest clubs, but still really valuable.

#3: Younousse Sankharé (DM - Senegal - 29)
Former PSG player who's played in at least 6 teams in Ligue 1. Physical beast, can be the rock in your mid-table club's midfield.

#4: Alexander Milosevic (DC - Sweden - 27)
Little experience in big competitions and not really recommended for it now. Second tier clubs are his natural habitat.

#5: Tommie Hoban (D RLC - Ireland - 25)
Developed from Watford's lower categories and played there for almost all his career, he is perfect for a second division club. His polivalence in defense is his biggest strength.

These TOP 5 Free Transfers can be your better options if you need to complete your squad at a low price. Well, I don't think Sturridge is gonna accept a low salary... but trying is free!