Does Football Manager need a competitor? 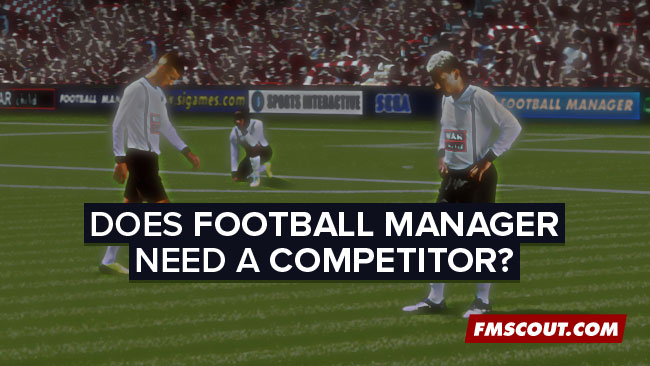 There’s no greater joy for football fans than witnessing their favourite club side lift the League trophy, the domestic or continental cup, or their country winning the World Cup. Whether you’re in the stadium with other fans or thousands of miles away in front of a television, the exhilaration and joy you feel is very much real; it’s like you’re part of your team. Football Manager, the game, offers the same advantages with an added one – you control the team’s destiny.

The game developed by Sport Interactive and published by Sega for the last decade, is by-far the most popular football simulation game in the market today: its realism, user interface and the painstakingly extensive simulation features playing a huge role.

While Premier League side, Everton, among other teams using the Football Manager database is a testament to the game’s scouting network of 1300 real-life fans over 51 countries, players of the Football Manager game enjoy a wide-range of options. For some, it’s about buying, selling, benching and fining the very best players in the world, while for others, it’s finding hidden gems from various corners of the world, for hardcore players, it’s about building a team from scratch and creating a dynasty over years and decades; FM has something to offer for everybody.

About a couple of months before the release of the game, the creators (led by studio director of Sports Interactive, Miles Jacobson) reveal new features of the next edition, much to the delight of the fans of the game. In fact, the ‘Managermotion’ and ‘Dynamic rivalries’ features for FM 2016 have already been announced.

However, fans are asking has the game evolved enough over the years? Popular opinion: ‘NO’. On a Facebook post about FM16 new features, one fan said, “Every year the same thing. Hundreds of small changes, and nothing really new or innovative”.

Yes, there was an incredibly innovative feature available in the FM 2013 edition – Football Manager Classic, which gave the players a streamlined version of the game. However, this feature was directed towards the casual players of the game rather than those that love the game for its immersive experience.

Another long-time player speaks of the lack of changes in the Football Manager franchise but why the sales of this game have not dwindled, fans will buy the game even without excitement about the features.

“I love CM/FM and I've played them since CM 93/94 and enjoyed it so far... I've bought every single version up until FM 15. FM has just lost the magic, CM/FM used to have and as many others…, it’s getting harder and harder to get excited with all the small tweaks coming each year…”
(CM or Championship Manager was the predecessor of Football Manager, during the Sports Interactive-Eidos partnership)

Football Manager, to a fan, is like a drug! A blanket of smaller changes may be covering the same edition year after year, but it’s impossible to miss out on the newer version, in the expectation of change. With every edition, with every minor change, there is the hope that the game of this year will be better than last. In most years, this expectation holds true – the 2015 edition, in most people’s opinion, was an improvement on the 2014 one, but did it improve enough for fans to spend their money on it? I won’t know for sure, because like most fans, I pre-ordered the game a month before the game was out.

What is the reason for the lack of innovation in the game: Is it the immense success of the game every year or is it that the game cannot risk losing the fan base by over-complicated changes? The answer is somewhere in between.

There are thousands of games available on various platforms and if Sports Interactive were to add dozens of major features, it could lose the casual gamer, for whom the game is no longer fun. After all, that’s what we expect games to be – fun!

More importantly, with hardly any competition, there is no requirement for SI to change the game. As I mentioned earlier, the fans will purchase the new edition of the game irrespective of the changes and tweaks made to the game (desirable or undesirable). There is no football simulation franchise the fans can turn to, if the new FM were to be a carbon copy of the last one.

Much like Pro-Evolution Soccer picks up the odd FIFA fan unhappy with the game, Football Manager could do with a challenger to really bring in the changes and make the game as exciting and universally loved as it was at its peak.

There appears to be no competitor in the near-future for Sports Interactive and Football Manager but themselves. So, as a fan, let’s hope Miles Jacobson and his team aim to out-do the 2015 edition this time around, at the very least.

I will be buying the FM2016 game, just like I’ve bought every one since I discovered it. In fact, I think right after hitting submit, I’ll check FMScout store to see if pre-ordering is available.