How to RETRAIN PLAYER Position in FM21

In this video, Mijhou dives into how to train your players - in particular retraining them to play elsewhere on the pitch in the form of an experiment. Using Liverpool and their raft of Superstars and Football Manager 2021 Wonderkids, it's an excellent experiment from an up and coming creator.

Today's video is about the joys of retraining player positions, but why would you want to train a player to play in a different position?

Well, there are many different options and reasons why. Sometimes you may have an injury crisis so the only option you've got is to play one of your current players in a different position.

By retraining players to be able to play in other positions obviously that will help you and help your squad depth.

Also other reasons might be that you may be stacked in one particular area and you need to be able to keep one of your favorite players in the team you're not ready to let him go yet, so you need to try and make way for him to be able to still play.

So again retraining that player will obviously help to be able to keep him in the team as well as putting out your strongest side.

Also if you don't have a lot of money and you're a team that needs strengthening in certain areas but you don't have the funds to bring players in, retraining players that you currently have in your squad - but not necessarily in your starting 11 - will help for you to be able to have a strong team but also not have to spend money.

There are a few different things that are required for you to be able to retrain your player to the best that you can.

Age isn't one of those requirements that is necessary. You don't have to have a young player to retrain. It works for older players as well. Obviously if you've got a younger player they've got more time to be able to perfect the position that they're practicing to train in but it works again with older players.

Personality traits will help if you have someone who is professional or hard-working they're going to be able to develop into a different position a lot easier.

Then you have attributes like determination they always help as well, so there's a lot of key factors that help you train a player successfully.

It doesn't matter if you want to train a player from a green circle to an area where they've got no ability at all if they've got the attributes to be able to play that position.

A key point for you to remember is you have to play a player in that position they're not going to be able to train for a position but not get game time, then it doesn't work.

Also other factors such as training; if they are currently not 100 familiar with your tactic that's not necessarily going to help the workload for that player as well, so if you've got a tactic where tactical familiarity is really really good it's just less for them to do.

There are hidden attributes as well which helps determine a player's career basically and versatility is one of the key points which is built in into the game. It's not necessarily something that you can find but it is there so that will obviously help them if they are a versatile player.

Beware if you do retrain a player and take him from say a natural position and retrain him somewhere else, eventually he will forget how to play in that role if he's playing a different role as well.

Other factors that can help is partnerships if you play a player next to someone else and they speak the same language or they're in the same national team, that will always help as well. 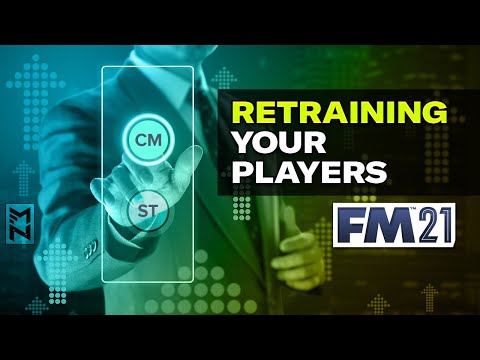